Yes. We are running out of sand, and time.

Things look limitless when you stand on the shore of the Gulf of Mexico. The horizon dips away, maybe with a lovely sunset alighting it. Water, wind, and sand: the essential beach elements. There have been decades of activism and battles with development about clean water and access to air. What about the sand?

Sand is everywhere (not just on the shore)

Windows. Buildings. Roads. Hydraulic fracturing. Beach renourishment. The screens we stare into. Volleyball courts. Oh, and the sands of time, of course. Technology has given humans ways to build in places where it was previously borderline impossible. Global economies have helped promote the desire or need for more buildings and roads at a scale unknown to any of our ancestors. Sure, the pyramids are amazing, but have you seen the first Palm Island in Dubai? It is an artificial island, a mile long, palm tree shaped home to luxury resorts, villas and retail. All built from marine sand and rocks.

The impact of Dubai’s building boom on the environment spurred GreenPeace into action against the construction. The plans to build two more artificial islands may not come to fruition.  Construction of The World, a group of artificial islands shaped like the continents and islands of Earth, hasn’t been smooth. Though some of The World is already bought by billionaires. Dubai also announced two new luxury islands will be built. But Dubai is just one small part of a global problem.

The world is running out

The New Yorker magazine published an article by that title outlining the increasing concerns of scientists and environmentalists. They’re worried about the cost of obtaining and using sand to the planet’s health. This paragraph stands out,

Pascal Peduzzi, a Swiss scientist and the director of one of the U.N.’s environmental groups, told the BBC last May that China’s swift development had consumed more sand in the previous four years than the United States used in the past century. In India, commercially useful sand is now so scarce that markets for it are dominated by “sand mafias”—criminal enterprises that sell material taken illegally from rivers and other sources, sometimes killing to safeguard their deposits. In the United States, the fastest-growing uses include the fortification of shorelines eroded by rising sea levels and more and more powerful ocean storms—efforts that, like many attempts to address environmental challenges, create environmental challenges of their own.

FORTY BILLION TONS OF SAND A YEAR is how much the United Nations estimates is being used these days. Sorry for yelling, but that is a lot of sand. There is a growing appetite and need for everything sand does, but the list of the downsides of sand mining keeps growing. Corruption, greed, tax evasion and criminal activity, and dicey global politics are the above ground problems, not even considering what is happening to the flora and fauna of the sea.

Life’s a beach, made with borrowed sand 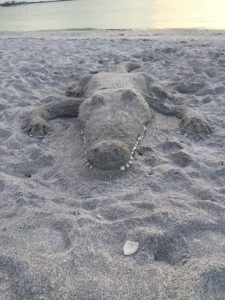 The sand in the vast deserts of the world isn’t usable in construction or glass or the various ways we currently use sand. You have to look underground or underwater for your supply. In 2017 Pinellas was awarded a $30 million beach renourishment grant. Beach towns and local governments applaud the beach renourishment – even when it benefits private landowners – because tourism is the engine of the Florida economy. No beaches, no tourists, and a lot less property that is considered desirable. More than $50 million is included in the 2021 Florida budget for beach renourishment and repair.

Where does the sand come from for our renourishment? Same place it goes back into – the Gulf. What impact does dredging have on the marine environment in the Gulf? National Geographic’s Carl Safina wrote about the Port of Miami and the difficulties resulting from dredging there,

“…the process of dredging kicks up huge quantities of sediment and disrupts organisms living on the seafloor, upsetting the balance of marine ecosystems.”

Don’t stick our heads in the sand

The Bureau of Ocean Energy Management (BOEM) released a detailed report in 2013 focusing on the impact of dredging from the outer continental shelf (OCS). You can read it here. The sand is considered borrowed, since it flows back into the sea. Dredge areas are called borrows. The sand atop these borrows might be too fine to use for beach renourishment, so deep pits are dug, following along the ridges and swales created by wave action. The BOEM writes in the report,

… little is known about the ecological importance of offshore ridge and swale complexes (individually and regionally). Until more is known about their habitat functions and importance, the approach has been to identify and implement dredging guidelines to maintain the geomorphic integrity of shoals, to the extent possible…

The report finds that in some areas, the sandy seabed will reorient during severe storms, but there are wide variations in how the benthic (lowest ecological part of a body of water) areas in the OCS restores itself. The report notes that there aren’t a lot of long term studies on how the fauna recovers from dredging. While the creatures that live in and on the sandy seabed might repopulate in 2-4 years, there may be a difference in the diversity of that population, not only because of the disturbance of the ocean floor.

The finer grained sand which is left behind not only changes the amount of light that filters through the water, but the density of the benthic area. So it could be darker, denser, and muddier when the dredging is done. The sediment can float over to cover coral and other marine ecosystems. Another area of the BOEM report explores the impact of the noise from dredging on marine life, and concludes that

based on the information currently available, dredging operations generally produce low levels of sound energy that are of short duration; therefore, the impacts of underwater sound on fish populations are expected to be temporary and localized. However, more research is required before the effect of dredging sound on fishes can be fully assessed.

though the report does cite some studies that show damage to marine life from dredging sound.

Nor does sand only come from the ocean. Streamside sand mining affects the structure of rivers, destabilizing the banks. Important structures that rely on solid banks, like bridges, roads, and boardwalks, may loose some stability. There can be saltwater intrusion into a damaged riverbed. Indigenous plants and animals are not only affected by the loss of habitat, but the destruction that the mining equipment causes on the banks and surrounding environment.

Nothing is built on stone; all is built on sand,
but we must build as if the sand were stone.
Jorge Luis Borges

What are the alternatives to using sand? India is exploring manufacturing sand  for construction by crushing granite or basalt rock; using aggregates left over from construction process instead of sand in concrete, sometimes called blue sand; a variety of slags could be used as substitutes; and this company seems to be very active in developing green building practices on a large scale.

Examining how and when concrete is used might be an easier way to save sand and the environment – concrete is both literally and figuratively a dirty industry. Using composite wood and recycled plastic to make bricks are being floated as valid alternatives for smaller construction projects.

Fracking sand, which is used when wells for oil or natural gas are being drilled to open up new areas and break rock, is once again in demand in the US. Reuters reported earlier this year that

Raymond James, in a January investor note, estimated frac sand demand would hit record levels this year at roughly 55 million tons and exceed 80 million tons by next year, 60 percent above 2014 levels, due in large part to producers requiring more sand per well.

The rising cost of the frac sand might force frackers into using alternatives, such as locally created ceramic materials. Part of the increase in cost is because there are so many rigs coming online. Fossil fuel extraction requires sand. Decreasing exploration for fossil fuels, unlikely in the current times, is the only foreseeable alternative.

Even more worrisome are the physical dangers to workers from frac sand. NPR and others report that clouds of sand dust from fracking contains silica, so much silica in places that the respirators workers wear cannot screen it all out. Exposure to silica in lungs can lead to cancer or silicosis.

We need more resources to replace sand. Most of the suggested replacements are other natural resources. The economics of sand will probably do more to shape any changes – the rich countries are taking sand from the poor countries. At some point research on accelerating the natural creation of desirable sand, or materials that can replace concrete might have an impact. More likely a global economic crisis will slow down sand mining. Until then, when you are at the beach, appreciate that soft stuff squishing between your toes. It is worth more than gold.

Down to Earth article by Avikal Somvanshi

This site uses Akismet to reduce spam. Learn how your comment data is processed.